Text and pictures: Aleksandra Minić The true spirit of Bahia you can feel in smaller towns where normal rhythm of Bahian life rules. Here time goes slowly and easy. So slowly and easy that it seems you're sleepy all day long. That's what people from Bahia is widely famous for. Serra Grande was my last destination where I spent most of my time. Here is situated a center of Capoeira Angola Barracão D’Angola, something like our Center of Capoeira Angola where I give classes, but in far more developed form. 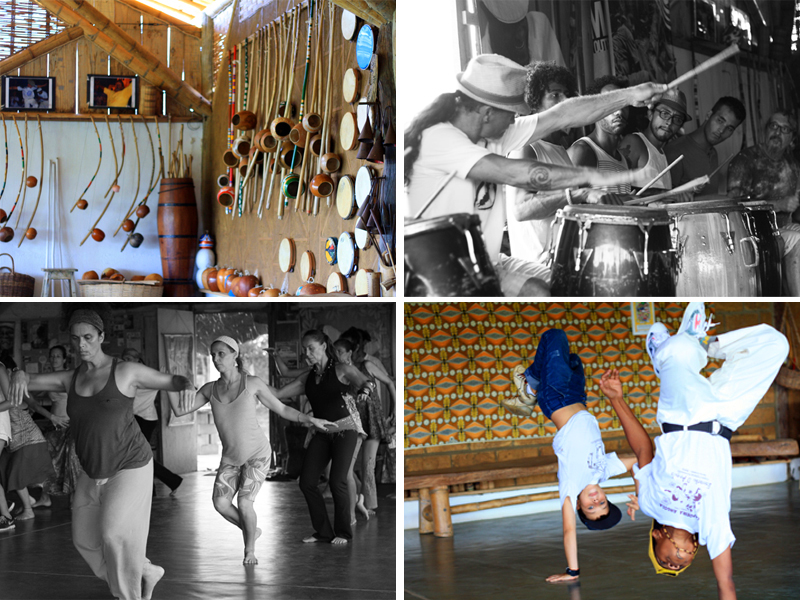 It is led by masters Cabello and his wife Tisza. Even though it's still under construction, Barracão got acknowledged as a cultural point. A place full of spirit and inspiration, good Capoeira, Afro dances, percussion. A Center of gathering for local people, but also people from all around the world attracted by Capoeira, like me, or percussion. Not just ordinary fans but also high level masters and musicians. So I found myself in company of Brazilians, Mexicans, Americans, Israeli, Russians, Hungarians, Spanish, Argentineans, Turks and others. In the center of the town is a square which at night becomes the main point for gatherings and hanging out. Once a month there is a festival held here with rich program and stands for selling handcraft. Forget social networks because Internet here doesn't even work that well. You have some signal for your cell phone, but often not. Instead, immerge into nature, rainforest which covers the whole area, sunny beaches 10 minutes away from the center by bus, spending time with friends all day long, chats, live conversations. 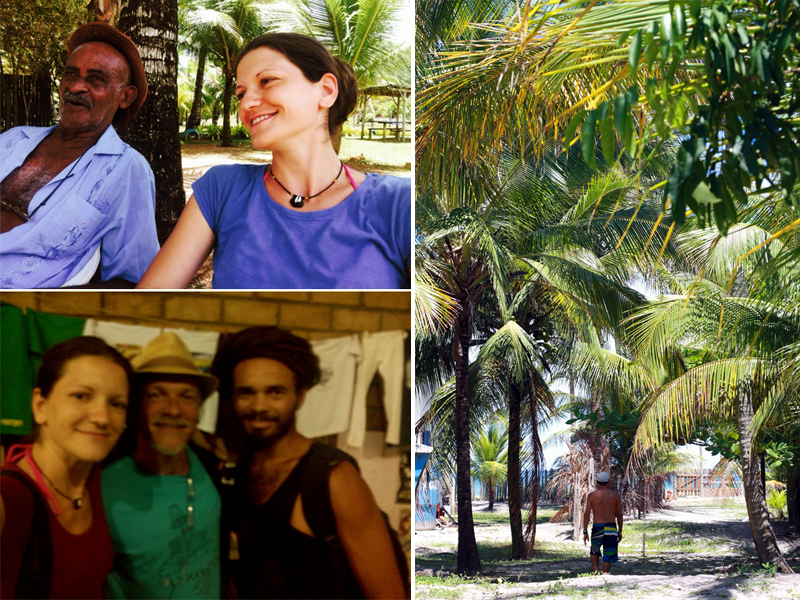 If you're spending time with a bunch of people like me, get ready for often rides in the back of a car or truck. It's a real adventure since the roads are known for deep holes which locals mostly bypass very skillfully... mostly. The spirit of this place reminded me of Serbia more than other places. We had one car which I loved, looks like a car of Nick Slaughter (TV series character famous in Serbia). It's completely falling apart, starts only by push. When you ride it, you count on ending up in a ditch pushing it uphill because you didn't manage to start it pushing it downhill. 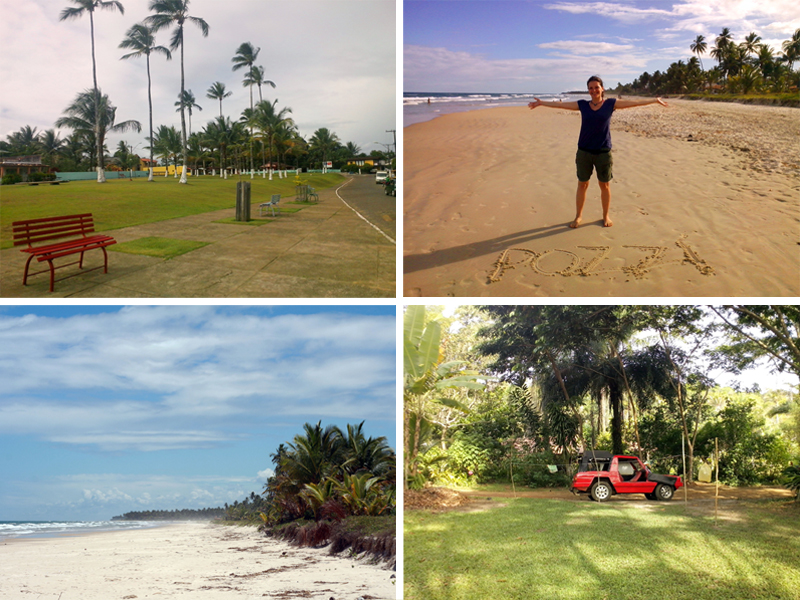 I was situated in Cabello's and Tisza's fazenda Ouroverde in the middle of the rainforest. There is a dirt path leading to the fazenda which is at one point cut by a stream. You can't go around it and there is no bridge, so you have to step through it. Fazenda is a place where you can see the true power of nature, where palm trees, coconut trees, bananas, cacao grow. The whole cost is known as Cost of Cacao. What amazes you are the colors of plants, flowers, and even birds – green, yellow, red, turquoise. You should live to hear the sound of the rainforest. All the crickets, bugs and birds, and some night sounds which later they explained to me are monkeys. 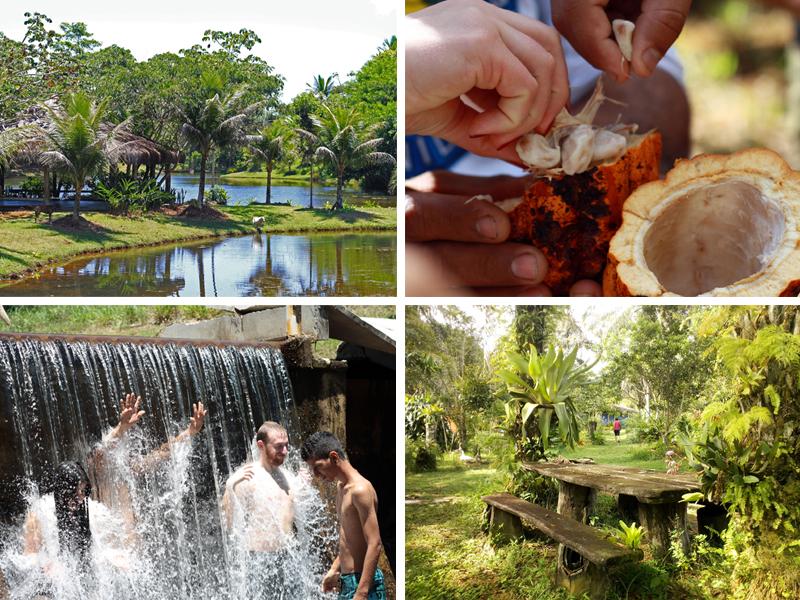 We had as an option for swimming a beautiful lake on the fazenda. They made it by building a dam on a stream. On the other side of the dam is a beautiful waterfall which also serves as a natural shower. The water in all rivers is a bit blurry. The first time I entered the water I thought what my parents would have said if they could have seen me. But everybody goes there for a swim so I had to show the courage of a real Serbian. The water is warm, in rivers and the sea. You get a perfect tan in the sun but be sure to use sun cream. For my white tan which poked eyes of other visitors of the beach, joking they called me milk. When I got some tan, I was coffee with milk. Have I mentioned already that the people is wonderful? The nearest beach is Prainha. It's not that much for swimming, but it has a fantastic view. Just 15 minutes from the center is a beach 40 km long, between Serra Grande and the city of Ilhéus. It has strong tides and big waves, so follow the line to where the locals go and don't go deeper, they know why. You can feel the tide as it pulls out the sand from beneath your feet. 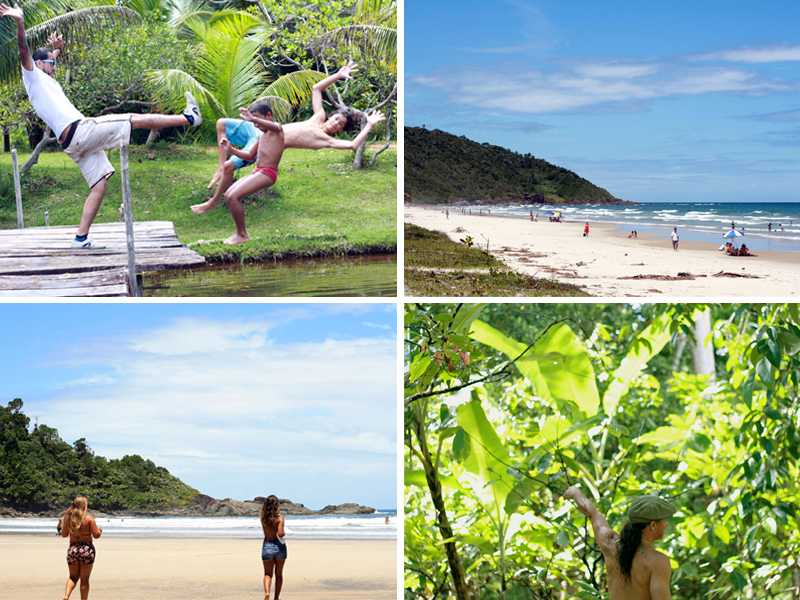 Life takes place here, in a bar at the beach. Underneath a canopy made of natural material with coco, beer or caipirinha in hand. Near is also a place called Itacaré where you can find some of the most beautiful beaches. There are hidden beaches so you have to go through forest trails just to see in one moment the blue horizon opening in front of you and an incredible view. The first time you see a starry sky in the Southern Hemisphere you remember it good. It gets a bit chilly in the evening and at night. It always rains at night, it's not called rainforest for no reason. There are a lot of mosquitoes and you need protection. You should pay attention to small bugs. First few days when I arrived, I had a feeling that everything in that forest wants to eat me. They warned me not to lean on trees and not to hug it, to my disappointment. They say here you lean on a tree and the termites eat you. You should be fine if you use protection for insects. Still, don't hug trees and don't walk barefoot. It could be dangerous because of the infections. If you think it's not a big deal and that you can manage without protection for sure, you'll end up with legs full of bites from mosquitoes and flies... like me. 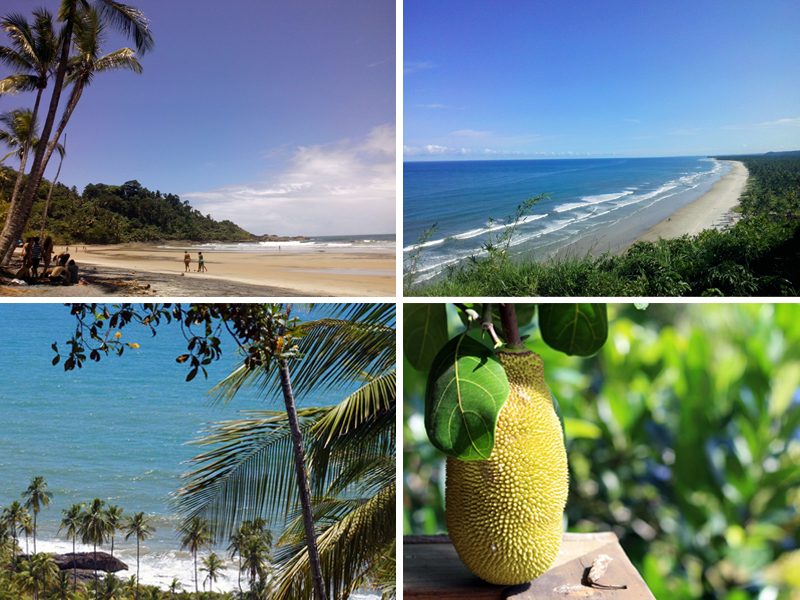 Food in Bahia is extremely tasty. For breakfast we had rolls with very tasty butter that just melts in your mouth and a lot of fruit to go with it. Basic lunch is till beans and rice, but you have all sorts of fruit and vegetable combinations with it. In Bahia you have a perfect combination of sweet-salty taste with fruit and sweet potato which go very well with rice and beans. Muqueca, fish, meat, it's all prepared perfectly. Even in this small town you have a restaurant which sells food by kilo. You should avoid pizza places in Brazil, but if you feel nostalgic for some European food, here you can find a great pizzeria which offers a good Italian pizza. In the evening everybody likes to eat tapioca. Something like Serbian palačinka made of mandioca flour with salty of sweet filling. You can choose delightful vegetarian food at a local restaurant. If you don't eat hot, you don't deserve the magnificent hot sauce they make out of the hottest peppers in oil. There are different levels of hot and everybody eats hot. Don't be an alien. There is also the very healthy açaí. For drink it's usually natural juices, beer, caipirinha. You can find a place to stay in the forest or by the sea. The nearest bigger city is already mentioned Ilhéus which also has an airport. There is a view point in Serra Grande they say has the most beautiful view in Bahia. The hospitality in this small place is incredible. Here I spent my New Year's Eve at the beach, everybody in white by the sea. And then eating too much again, if you can imagine. You don't need a lot of time to find friends or „fans“, it's almost like you just need to show up. But, I guess that homemade cachaça I brought from home helped a bit. Everybody calls you to visit his home. They take you everywhere, to the beach, to the city, to events. If you're there, you're with them. During the day we were at the Barracão always with some activities or at the beach. In the evening we would walk to the square where night life begins at the street or a party at the pizza place. 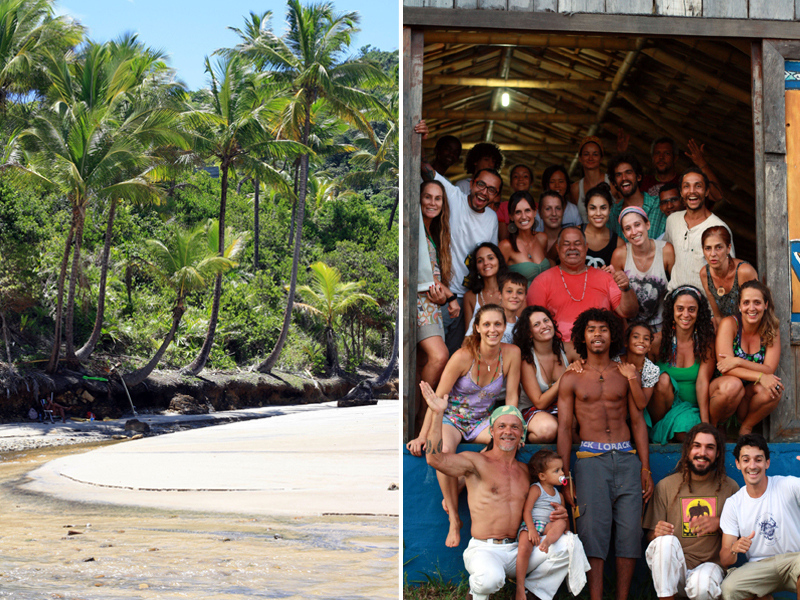 The surroundings and the lifestyle conquer you so much that soon you start to feel like you've always been there Text and pictures: Aleksandra Minić Published at blog: www.utiscisaputovanja.com